Today Vivian and I went to Formosan Aboriginal Culture Village. This is a mixture between an amusement park and a showcase of aboriginal culture. Taiwan has 13 different tribes of aborigines. In the park one could see houses of aborigines which very transferred to the park from their original site. Performers in the park illustrate the way of life of those tribes.The amusement park part of the area featured three bigger roller coasters and several smaller rides as well as a 3D cinema. The theme of this area was mainly the famous comics “one piece”.

The sun here is really strong. With my light skin I have to be very careful not to get a sunburn. In the amusement park we spend a lot of time outside without air conditioning so it got really hot after a while. Maybe because of sun and heat I got a little bit of a headache today. But it got better after a little nap in the hotel and a nice dinner.

Unfortunately I couldn’t transfer all my pictures from today to my netbook (I used another camera than the other days). So I only have the pictures that Vivian took to show you. I will probably edit this post on the weekend to also feature my pictures. 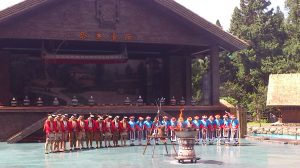 Oh and I just remembered something else that i forgot to share:

The day before yesterday at our visit to ChungHwa Telecom I got to taste the famous 1000 year egg. My host family had bought it for me to try,  at lunch it was cut into small pieces and distributed between the international guests.
A CNN report from June this year claims that this egg is the worst food in the world! On place two is woodworm from the Philippines. Also on this list is dog meat from South Korea and Fried tarantula from Cambodia. Wikipedia gives some information on what this egg actually is: The 1000 year eggs are real eggs which are preserved over several months. In this process the egg changes colour. The yolk becomes green/grey and the white turns brown. I have to say that it does not look very yummy 😉 Usually Taiwanese people eat it with sauce, I tried it pure. And at least without any sauce it did not taste good to me 😉 If it is the worst food in the world – i don’t know. I haven’t tasted enough food to compare. But it definitely will not become my favorite dish 😉